I closed Iris’ Murdoch’s 1978 novel Booker-winning novel yesterday with frustration. Maybe I should have been an English major? 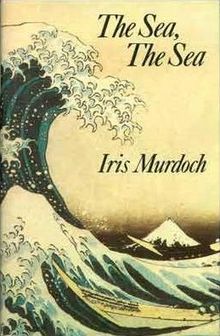 I didn’t read the introduction until after I’d read the last page–introductions being full of spoilers, in my experience. Turned out the story was in based on the work of a Tibetan poet, Milarepa, whose name was used (not his person, but only his name) in the novel.

Reading more about Murdoch’s work, I discovered that the name of the book came not from the obvious–the location of the protagonist’s home or his obsession with swimming, but from the Greek writer Xenophon, by way of a French poem by Paul Valéry, which Murdoch mentioned in another book. Thus, a private play of ideas available to those who know the Greeks and Tibetan poets.

I’m frustrated because I enjoyed the book in many parts and sensed a scheme at work, but had no way identifying it. I felt as though the characters were bound to act in perplexing ways, but I didn’t know why. It’s over-the-top on the central character, Charles Arrowby, an aging actor-director who retires to a decaying house on the English coast to “learn how to be good,” while writing his memoirs. He promptly bores us with his self-absorbed arrogance. When his supporting cast of characters arrive, they enliven the scene but are unable to get between Arrowby and his single-minded obsessions.

I laughed, I was alternately sad and bored and embarrassed while always in search of the Booker jury’s reasoning. Did they know about the Tibetan poet and the Greeks?

Did Murdoch intend this story to be half-understood? Or did she write for those like herself who could puzzle out the strangeness of the plot through clues like the name of the book, and the name of the Tibetan poet?  I did get all the lovely bits about the theatre and Shakespeare. Got all the Shakespeare, all The Tempest and Twelfth Night. Yes, do read it for that. And Arrowby’s strange idea about being a foodie. There was much to enjoy–and much to wonder about.

This site uses Akismet to reduce spam. Learn how your comment data is processed.

Devouring words one page at a time.

Imagining books and music in quirky and creative ways

a little bird tweets
A Writer of History

Reporting and consulting on the publishing industry

Publication is not all that it is cracked up to be. But writing is. Anne Lamott

My Life in Books

Publication is not all that it is cracked up to be. But writing is. Anne Lamott

A Little Blog of Books

Book reviews and other literary-related musings

Hey Did You Know I Write Books

On publishing, clients, writing, and queries